In 1990s Los Angeles, 13-year-old Stevie (Sunny Suljic) escapes his turbulent home life by hanging out with a new group of friends he meets at a local skate shop, plunging him into a world of fun, danger and excitement.

All I knew about Mid90s going in was that it involved skaters and was Jonah Hill’s directorial debut. With that said, I heard some divided reactions to it so I didn’t know how I would feel about it. While I do like the movie a little bit, it wasn’t as great as I was hoping it would be. With that said, that’s not to say that there aren’t some very solid aspects to it.

I really wasn’t feeling Mid90s when it started, not that it didn’t have some good aspects in the first half though. For one, there is a certain amount of grittiness to it that you don’t really see in other coming of age stories. The dialogue (mainly between the kid characters) seems to be keeping with how people spoke in the 90s. Now I didn’t grow up in the 90s or in the skater area, so I’m not sure how accurate this movie is in portraying that. However, considering that it’s a personal movie for Jonah Hill, I’ll assume that it’s authentic. However the movie still had its issues. The characters aren’t really fleshed out all that much, and we don’t really get to learn about them, so we don’t really get to care about any of them outside of the lead character. The story can be rather rough, and seems more like a bunch of snapshots of life rather than a focussed and structured story. Not that this method of storytelling can’t work, its just that it tends to have some drawbacks when used and have the potential to feel very unfocussed and not really moving towards anything, and you can really feel it here. Then there’s a certain uncomfortable scene halfway into the movie involving the lead character (aged 13 years old by the way) and a much older girl which other people have also talked about. I’m not necessarily criticising the idea of the scene because I’m guessing it’s meant to be uncomfortable, but all I’ll say is that that this sequence played out for too long and having a minor actor being part of that scene was irresponsible to say the least, especially when they could’ve cut the scene 3/4ths in and get the same effect and thereby avoiding any problems. Ironically it’s after this scene where the movie considerably improves with the second half, as the movie gets a lot more serious and darker. We also get to learn just a little more about some of the characters and it seems to actually be moving towards something. However, we still don’t really get to learn enough about the characters, and that second half is basically 40 minutes long and when it ends its rather abrupt. The acting all around was great and one of the best parts of the movie. Sunny Suljic is great in the lead role as Stevie, he’s only been in a few things (most notably The Killing of a Sacred Deer) but here he gives a really good performance (it definitely helps that his character gets the most depth and development out of any of the characters). The other skaters that Stevie befriended were also good but Na-kel Smith was particularly a standout. Stevie’s mother and brother played by Katherine Waterston and Lucas Hedges are also great. Really despite the lack of characterisation, the actors do really well in their roles. Jonah Hill made his directorial debut here and he did a great job here. Immediately you’ll notice that this film is shot as 4:3, giving it a nostalgic look to it. It all seems very authentic and gritty and fully in the 90s. You can tell that it is a lower budget movie, and that actually added to the movie, making it seem more personal. The music was also really good and fitted the time period and the movie very well. 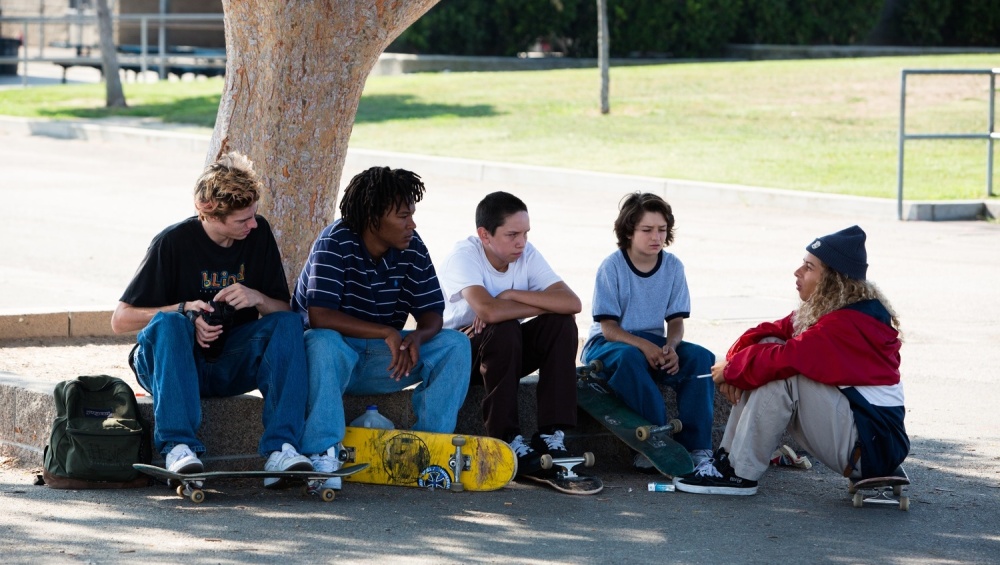 Mid90s doesn’t completely work but there’s things to admire that it does. It’s very rough and unfocussed but you can feel some genuine passion behind it, and it picks up much more in the second half. The direction and performances are also quite solid. If you’re the least bit curious about Mid90s, I’d say to check it out. It’s still a decent movie, just not as great as I wished that it was.