While a married couple (Willem Dafoe, Charlotte Gainsbourg) is having sex, their infant son in a nearby room falls out a window to his death. She becomes distraught and is hospitalized, but her husband, who is a psychiatrist, attempts to treat her. Deciding that she needs to face her fears, he takes her to a cabin in the woods where she spent a previous summer with the boy. Once they are there, she becomes more unhinged and starts perpetrating sexual violence on her husband and herself.

Lars von Trier has made many controversial movies in his reasonably large filmography, however it’s his 2009 film Antichrist that is still his most controversial of all. Having watched a couple of von Trier’s previous movies, I checked this out knowing not a lot (outside of some of the infamous moments) and while I guess I can say that I like it, I’m not quite sure what to feel about a lot of it. Generally the response to Antichrist was that the performances and direction were fantastic but very mixed feelings about the actual substance, I’d say that’s the case with me except I lean towards liking the story more than hating it.

Antichrist under an hour and 50 minutes long and honestly I can’t imagine it being longer than that. It’s in the horror genre but it’s not a full on horror movie, definitely don’t go into the movie expecting a horror movie despite the plot being about a couple staying in a cabin in the woods. The movie doesn’t rush into the horrific parts of the movie, it’s a rather slow paced movie that really shows the psychological decline of the two main characters. The third act is where it goes heavy into the extreme violence and what you’re expecting from the movie. Unlike Lars von Trier’s following movies which are more literal with what happens on screen, it’s pretty clear that much of what happens are symbolic or have deeper meanings. I myself wasn’t exactly sure about all the meanings and by the end of the movie I wasn’t really sure what the point of everything was. I can definitely tell that Lars was trying to tell something, it’s not just “hey let’s put two people together and torture them”. However I wasn’t able to understand much of what the movie was trying to say, and I especially don’t get what the ending is supposed to indicate. I won’t go in depth too much with the thematic elements because it’s better experienced for yourself (if you so choose to watch the movie) and also because I myself didn’t pick up on much. However I will address the fact that this movie got so many accusations of misogyny when it came out. Von Trier himself has been accused of misogyny for a while and it started with this movie. From watching the movie and hearing some peoples’ takes on it, I’m more inclined to believe that it’s taking on misogyny more than being misogynistic. Not that I can’t see how they would think the opposite but personally I think misogyny is a prevalent and deliberate theme in Antichrist. Side note, but despite its title, this movie doesn’t involve the Antichrist (at least I don’t think it is). On top of that, from what I can tell the movie really is about depression and nature. As you can expect, pretty much all of the movie is dark and depressing, the happiest scene of the movie is the intro, and that’s the one where a child dies. It is really worth noting that LVT was going through depression while both writing and directing Antichrist, so no doubt that played a big part in the writing of the movie. 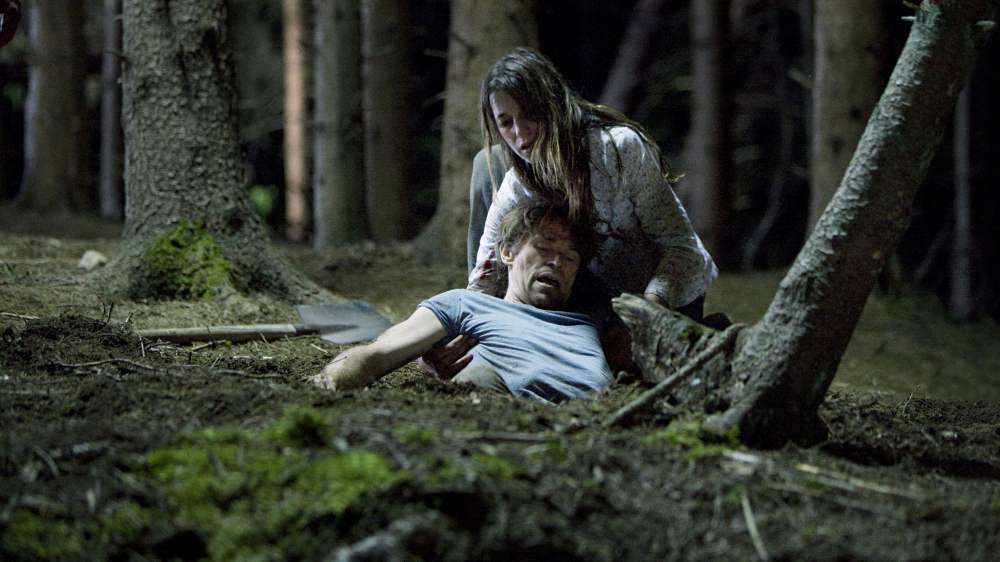 Really the only actors in the movie are Willem Dafoe and Charlotte Gainsbourg and they are fantastic. They play unnamed the unnamed couple (credited as He and She) who are trying to deal with the trauma of the death of their child, with Gainsbourg particularly suffering from depression. Dafoe is great as always but it’s Gainsbourg who is particularly impressive, with her having to do some very challenging things in the movie. There isn’t a ton of things when it comes to their characters, as they are more representative of ideas than actually being people.

This film is directed so beautifully by Lars von Trier, I loved the look, the use of colour, all of that. The opening sequence is simultaneously beautiful and tragic, shot in black and white and slow motion. Even before the movie goes to the darkest place of the story, it has such an unnerving feeling throughout, the way things are shot are just bleak. At the same time it’s a stunning looking movie, with beautiful visuals. Now this movie got hit with a lot of controversy, a big part of that being for the extreme content. There are some real sex scenes with real penetration (between Dafoe and Gainsbourg’s porn doubles, they didn’t do these moments themselves), and then there’s the violence. There isn’t a lot of it throughout the entire runtime but the majority of it is in the third act and it can be particularly grisly and unsettling. Now most of the graphic things that happen in the movie I heard before watching the movie, and because of this I think that’s why it didn’t bother me too much, though there were a couple scenes which were really hard to watch. I’ve also seen a lot of violent content in movies before so it wasn’t anything that challenging for me. On top of that, so much of the movie is metaphorical and symbolic that I sort of saw the characters more as representations of things than actual people, making it easier to watch. With that said it is still very graphic and if you are squeamish in the slightest, you aren’t going to be able to sit through to the end.

Saying that Antichrist is not for everyone would be an incredible understatement. It’s immaculately directed and the performances are incredible, but I’m not sure what to think about the rest of the movie yet. It wasn’t even so much the extreme content and more so what the movie is really about, I’m not against it, I just don’t completely understand what it’s trying to say (and I can tell that it’s definitely trying to say something). It may end up being a movie that I’ll need to revisit at some point in the future (even though I really don’t want to). Really all I can say is that if you have a very high threshold for movie violence and are open to more arty films, then maybe check it out if you’re interested in it. Outside of that, as good of a movie as it is, I can’t really recommend it.