Now that Chris (Daniel Kaluuya) and his girlfriend, Rose (Allison Williams), have reached the meet-the-parents milestone of dating, she invites him for a weekend getaway upstate with Missy and Dean. At first, Chris reads the family’s overly accommodating behavior as nervous attempts to deal with their daughter’s interracial relationship, but as the weekend progresses, a series of increasingly disturbing discoveries lead him to a truth that he never could have imagined.

Get Out is a movie that has been getting a lot of attention recently, and has already been called one of the best films of 2017. While it looked interesting, I wasn’t really sure what to expect from it. After finally seeing it, I have to say that Get Out really deserves all the hype, it really surprised me. It is both a great horror movie, as well as a great comedy. Jordan Peele has directed a great social commentary on modern racism, while at the same time creating a great horror movie. 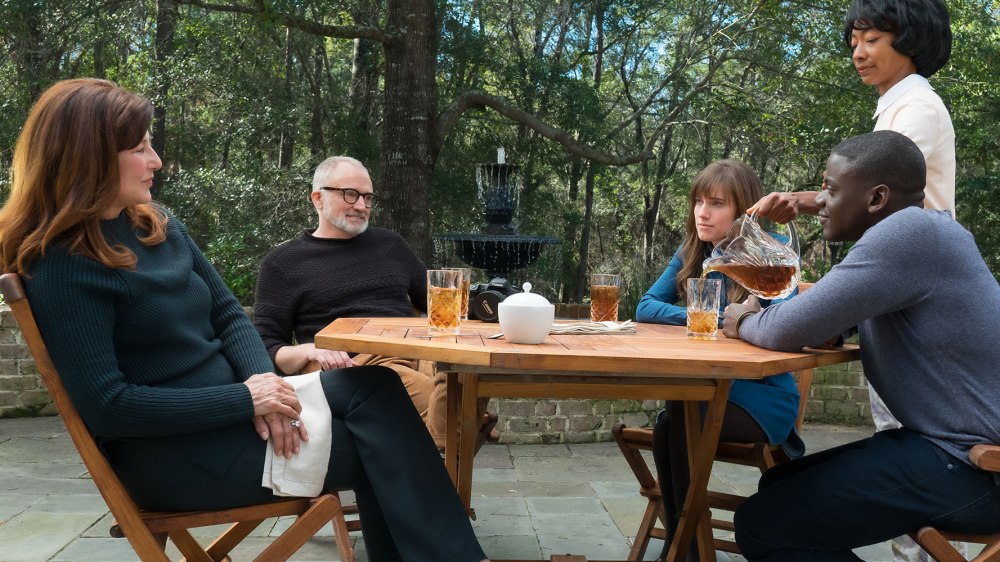 I was riveted from start to finish in this movie. Get Out has the perfect mix of horror and comedy. Horror comedies are extremely difficult to get right but this film nailed it, it knew when to have scares and when to have comedy, and none of these moments felt tonally out of place. This movie wasn’t that scary to me personally (granted most horror movies don’t really scare me) but it is very well crafted. Until the last act, most of the ‘scares’ aren’t that significant, but there is a constant feeling of uneasiness, as you know that something is off, you don’t know what it is. At the same time this movie is hilarious, sometimes some of the scares and ‘weird’ moments are for comedy, the dialogue at times can be really funny, especially between Chris and his friend Rod, and the comedy (when present) never detracts from the scares or tension. Of course the mix of horror and comedy isn’t just what makes the movie work so well, this film is smartly written by Jordan Peele. This movie is honestly one of the best written horror movies in recent years. The social commentary of Get Out is absolutely genius, which Peele explores in very subtle bits of dialogue, symbolism and writing. The racism aspect of the film is actually more in depth and complex than you may think, its not just that the girlfriend’s family is racist and doesn’t like Chris, there’s a lot more to it. So many things in this movie really does reflect today’s society, from the dialogue, to the way people act. In fact I’d say the most unrealistic thing in the movie is that someone uses Bing as a search engine. I won’t reveal too much about the movie as I don’t want to ruin any surprises, I’ll let you experience all this for yourself.

The acting from everyone was really good. Daniel Kaluuya and Allison Williams are very convincing as this couple who are basically surrounded by uncomfortable people. Kaluuya particularly was great, no matter your race it is very easy to relate to his character Chris, and Daniel’s acting played a big part in that working effectively. The girlfriend’s family members with Bradley Whitford, Catherine Keener and Caleb Landry Jones were also great, very unsettling but at the same time not too over the top. If there’s a showstealer performance it is of Lil Rel Howery as Chris’s friend, there are many moments when they talk on the phone. He was so hilarious, and the interactions with him and Chris were incredible entertaining.

The film is very well directed overall. It’s clear that Jordan Peele knows and loves horror, and he directs it excellently here. The scares were very well implemented throughout the movie, there aren’t many jump scares and when they are there, they are effective and well placed. The film looks absolutely stunning, and the visuals are amazing. This movie does have a lot of subtle visual symbolism, which Peele inserted into the movie in such a great way. The soundtrack by Michael Abels was really effective, and added a lot to the horror and suspense.

Get Out is one of the best horror movies in recent years. Smart, creepy and hilarious all at the same time, it’s no surprise why this film has been met with such critical acclaim. It seems that Peele has created a new type of horror/thriller, the ‘social thriller’. Apparently he’s planning on making more of these types of movies, and I’m very intrigued. He’s shown his talents as a director and writer with Get Out, so I can’t wait to see more of his work. If you are a fan of horror, I definitely recommend checking this out. Even if you aren’t the biggest fan of horror I suggest watching it. It’s one of the best movies of the year.