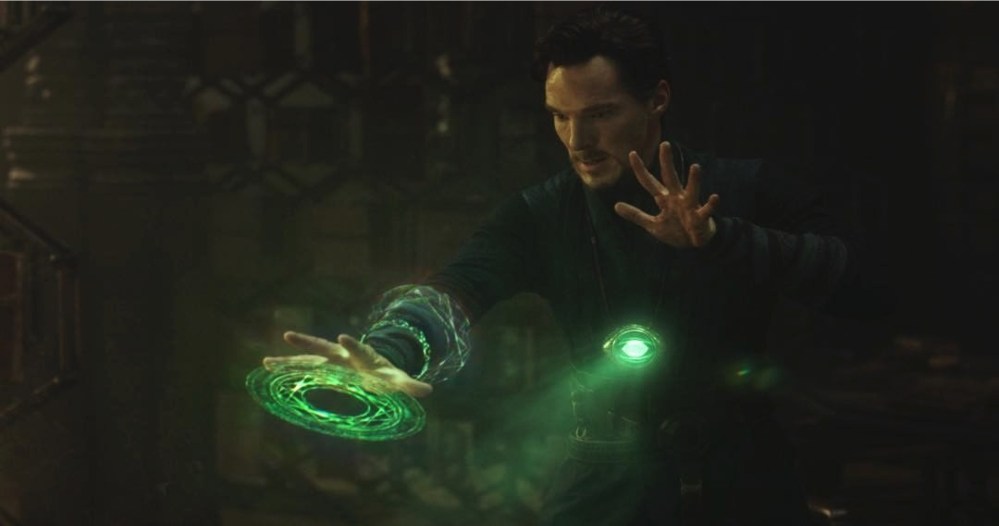 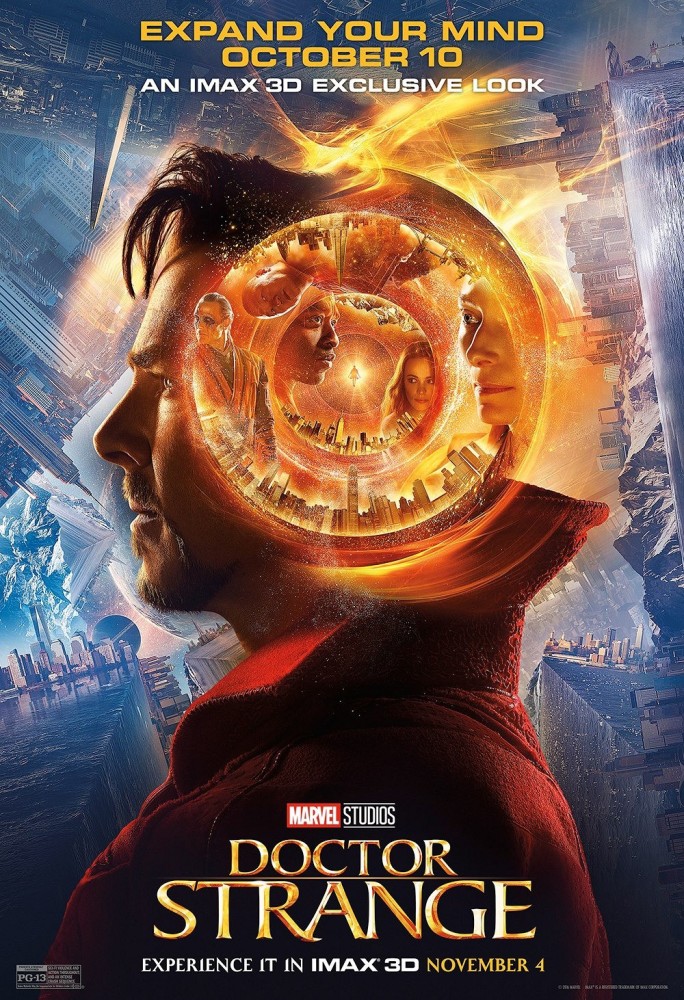 Dr. Stephen Strange’s (Benedict Cumberbatch) life changes after a car accident robs him of the use of his hands. When traditional medicine fails him, he looks for healing, and hope, in a mysterious enclave. He quickly learns that the enclave is at the front line of a battle against unseen dark forces bent on destroying reality. Before long, Strange is forced to choose between his life of fortune and status or leave it all behind to defend the world as the most powerful sorcerer in existence.

I wasn’t sure what to expect when it came to Doctor Strange, and it was one of my most anticipated films of 2016. As it was a MCU movie, I expected to like it but didn’t know what I would get, the MCU was exploring new territory, magic. And this movie intrigued me the more footage I saw. I have to say, after seeing this movie, Doctor Strange truly surprised me. From its well written and character driven story, the great acting from its stellar cast and of course, it’s spectacular special effects, Doctor Strange is both a fun time and also a really good movie in itself, as well as one of my favourite Marvel movies, and that’s saying a lot. 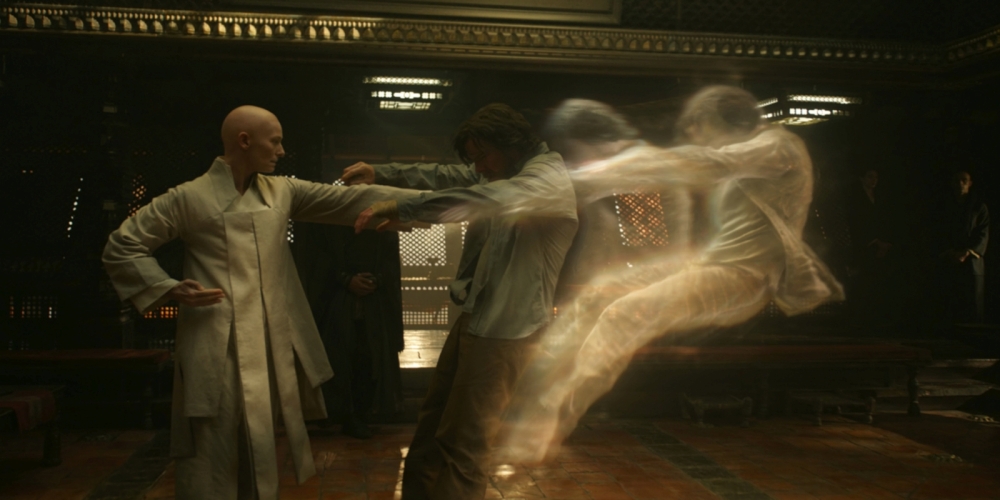 I could sell the film on the effects alone but the great thing is, I don’t have to. This film is so well written, it isn’t just a fun time, the characters are for the most part well established and have their own ideologies and identities. This is also one of the best MCU films in terms of its protagonist’s arc, the best since Iron Man. A lot of the other solo MCU films (like Captain America, Thor and Ant Man) had good protagonists but Doctor Strange’s arc is done incredibly well in comparison. At the beginning, Strange is arrogant and a little unlikable and over the course of the film you can see him change over time as he goes through his journey. This arc made Doctor Strange one of the best MCU characters yet (at least for me). Throughout the film, I thought it was well structured, the first act established Strange and took its time with it, which really helped his character arc. The second act brought Kaecillius (the main villain of the film) into the mix and I enjoyed the third act quite a bit. There is an aspect in the last act that I thought could’ve been done better but I can’t really say what it is because it is sort of a spoiler. It’s not major, it involved the final fight, I still liked the sequence though. In terms of the humour, most of it is done well, it’s not bad, constantly overdone or detracted from the seriousness of the situations, but I think they should’ve cut down a little bit of it, there was a little too much of it. I think I should mention that there are two credits scenes, without spoiling anything, I have to say that I loved both of them, and made me even more excited for the future MCU films.

Even though I thought the characters were for the most part well written, the actors really elevated their characters with their performances. Benedict Cumberbatch is perfectly suited as the titular character. Before anybody asks, no, he wasn’t playing Sherlock Holmes with magic, or just doing an impersonation of Tony Stark. He was and embodied his own special character, as I said, he goes through a huge character arc throughout the film. Now he’s one of my favourite MCU characters. Chiwetel Ejiofor is pretty good in this film (just know that his Karl Mordo is quite different from the comics), I do wish that he had more interactions with Cumberbatch but I’m looking forward to seeing more of him in future movies. Tilda Swinton is really great as The Ancient One, the mystical figure who teaches Strange, I kinda wanted to see more of her though. The MCU has a bad reputation of having weak villains, which is why I was worried when Mads Mikkelsen was cast as the villain, and I am a fan of Mads Mikkelsen. So, is he wasted? Yes… and no. Mads is great in his role, and his character is written well enough, given slightly more depth than most MCU villains, you can truly tell that he believes he’s doing the right thing for the world. At the same time though, he really should’ve been in the movie more, given a little more development and his backstory should’ve been explored more. I guess they wanted to focus more on Strange’s story. Rachel McAdams is pretty much the girlfriend character but she managed to rise above it and did give quite a good performance, her character just should’ve been written better. 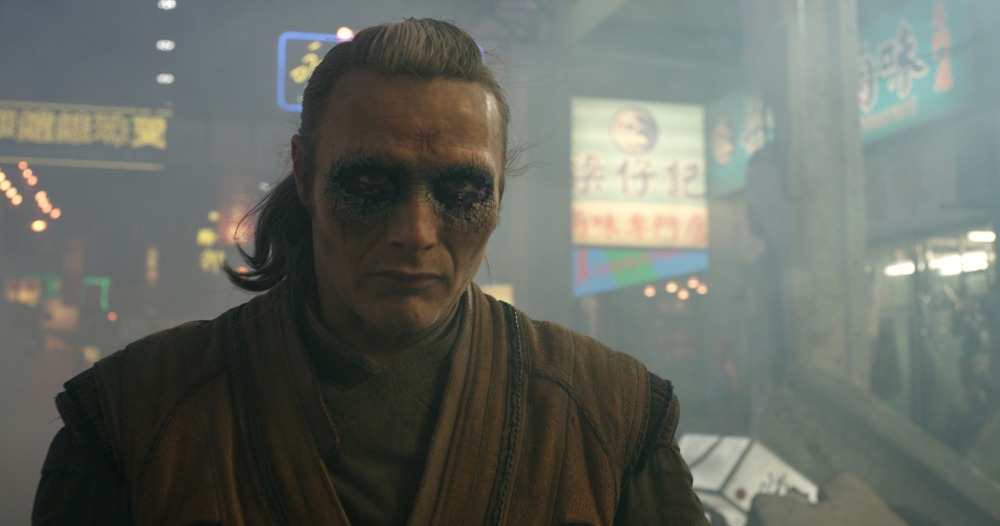 The special effects are truly great, the action is very creative, with buildings turning all over the place, time going into reverse, it’s very… different. I know a lot of people will be saying that this movie rips off Inception, but even if that’s the case, I’m honestly fine with it, Inception is great. The magic is also a nice edition and done so well, it’s fun to watch all these characters use it. I must stress that if you are going to see this movie, go see it in 3D, its an absolute necessity. I will say that at times it runs into the case with “too much effects on screen at the same time” like what happened with the Star Wars Prequels (though not to that extreme). The score by Michael Giacchino is something different from a usual MCU score, it worked for the movie, even if it’s not very memorable in hindsight.

I absolutely loved Doctor Strange. It’s not just a fun movie with great action and spectacular effects, it’s backed up by a well written story, a well developed main character, great acting from it’s very talented cast (which at times elevated the material they worked with), everything that a good comic book movie needs. Looking at things, this is currently my 5th favourite film of the MCU, and I didn’t expect that. I highly recommend seeing Doctor Strange, it’s a great time.