Promoted to 00 status, James Bond (Daniel Craig) goes on his first mission where he must face Le Chiffre (Mads Mikkelsen), a private banker to the world’s terrorists. Le Chiffre set up a poker game a Montenegro to receive a large sum of money. The head of M16, M (Judi Dench) sends Bond, along with Vesper Lynd (Eva Green) to attend this game and stop Le Chiffre from winning.

To me Casino Royale is the Batman Begins of James Bond. It took the series in a more realistic direction and ultimately, the best direction it could go in. Casino Royale reboots the franchise with its new tone, a new Bond and a fresh start. This is one of, if not the best James Bond movie made.

It has been argued by some die hard James Bond fans that this movie didn’t feel like a James Bond movie. It should be known that Casino Royale is the first James Bond novel written by Ian Fleming, in many ways this is a prequel to previous and later Bond movies being released. There aren’t any gadgets being used in this movie as much as previous Bond films did. Also a good thing to know is that you don’t have to have watched any of the previous Bond films to love this one, as the formula of the film is different from previous James Bond movies. Fans of the other Bond movies need to keep in mind that this is really the first James Bond; there were no gadgets, there were no one liners; this is Bond, before he really was Bond. The story’s pacing is done right, it isn’t the same as other Bond films but it was done well and was structured out well. 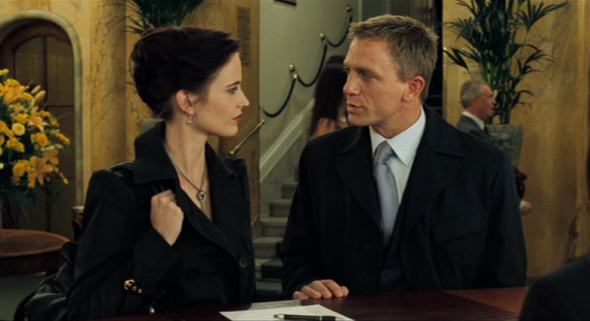 This movie’s tone was grittier than previous movies so it required an actor who could portray James Bond’s new characterisation; Craig does that here and also manages to have a naturalistic feeling as him. Each actor who has played Bond has their own take on him and in Casino Royale, he is a much more ruthless and cold-blooded character than how some of the other actors portrayed him. Daniel Craig’s performance is one that I can buy as being realistic. The supporting cast was also great especially Mads Mikkelsen as the film’s main antagonist, Le Chiffre. He was a Bond villain that managed to feel grounded in reality instead of being like some of the over-the-top villains in the franchise, as well as having a realistic motive unlike some others (like Hugo Drax from Moonraker). Eva Green plays Vesper Lynd who is a love interest to James Bond and shares great chemistry with Craig. In my opinion, her character is one of the best bond girls as she managed to actually make an impact on Bond, unlike many of the others the James would later come across (that were in the previous movies). Judi Dench returns for the 5th time as M and also stole the scenes that she was in.

The action in this movie is filmed well; it helps that this movie is under the direction of Martin Campbell, the man behind Goldeneye which was another great Bond Movie. The stunt work is also really good, especially a scene earlier in the film when Bond is in Madagascar. Casino Royale takes place in many locations and the cinematography is done very well in those many locations. The soundtrack also is very Bond-esque and gets the mood set up at the right moments.

Casino Royale and Skyfall are my two favourite James Bond movies. I still don’t know what I prefer but either way, because of Casino Royale, the series introduced a tone that I liked more than some of the other films had. I’m glad that the Bond franchise is going in this direction. With a new type of Bond, a story that is really good and action scenes that are really entertaining, Casino Royale gave me what I wanted in a good Bond film and overall, a good film.