New Orleans District Attorney Jim Garrison (Kevin Costner) investigates the assassination of President John F. Kennedy on November 22 1963 in Dallas, Texas. After looking deep enough, he suspects that there may be more to the story than the public is being told.

The assassination of John F. Kennedy is one of the biggest events in history and one of the most debated topics, especially when it came to conspiracy theories. I honestly didn’t know that much about the assassination before watching this film but after watching this movie it made me want to learn more about it. One of the things that makes JFK even better is the fact that these ‘characters’ are actually real people investigating what happened. The film isn’t just a documentary about possible scenarios of the president’s assassination; it follows Jim Garrison’s investigation. Whatever your thoughts on what happened with the assassination of John F. Kennedy are, this film is still worth a watch. 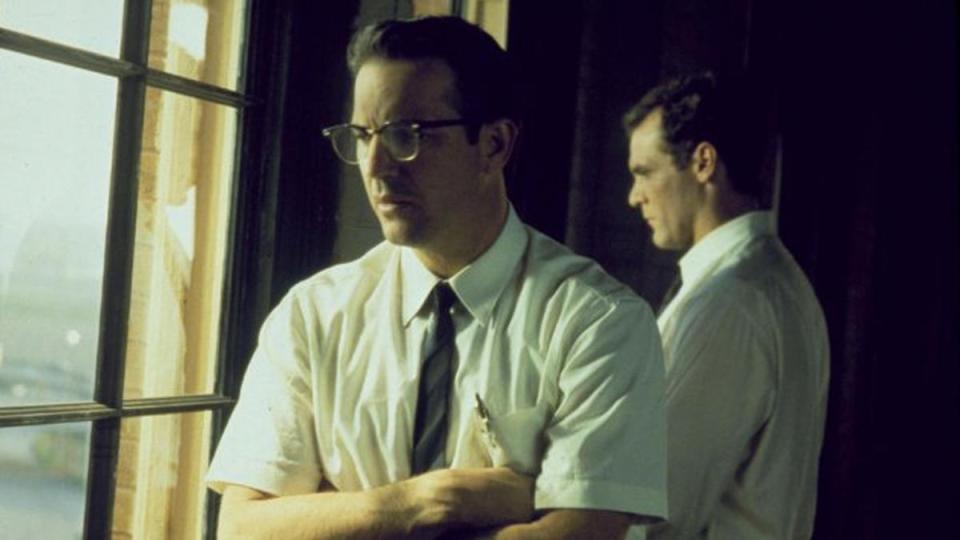 It was fascinating watching these real life people investigate the mystery as they try to piece everything together. If there is one thing you should know about JFK before watching it, it’s that it gets more interesting over time. It first builds up the events before the investigation and during those moments, viewers may feel a bit bored, however it is well worth the wait. This movie is also long – at about 3 hours and 10 minutes. The film also has a lot of details; there may be too much information to process at once; so viewers should keep that in mind before viewing it. People will definitely remember some facts more than others. My favourite part of the movie is the final act; it summarises every theory and discovery Garrison has found over the course of his investigation. I won’t spoil any of the scenes that happen in this movie because if you are like me – someone who didn’t know that much about the assassination, you will find all the scenes to be a great surprise.

The acting is top notch from everyone. The cast ranges from Kevin Costner to Tommy Lee Jones and Gary Oldman. All the actors in this movie are playing real life people and they definitely manage to feel like them. It may be easy to miss the acting while paying attention to the investigation but it still is really good and they should be applauded for their performances.

One of the most distinctive and defining things about this movie is the cinematography and the editing. When people make predictions or discover something that happened, it flashes back to the past and is cut in such a way that makes it feel like a documentary. Also, the film sometimes blends archive footage with new scenes with a 60s older look. A good example of great use of it again, is at the end. In the end, the film blends the real life moments recorded on camera in the 60s (such as Kennedy’s assassination) with the possible unseen (filmed for the movie). The soundtrack by John Williams is also great, as all his compositions usually are.

This movie should be seen, even just for learning about Jim Garrison’s search for the truth. I won’t mention what the scenario of the assassination is true; those are left up to the viewer. JFK can really get people talking about what they thought really happened, and can give people a different perspective on certain events in history. As someone who isn’t usually that interested or into conspiracy theories, I loved this movie and I recommend it to everyone. It is one of Oliver Stone’s best films.